A meeting with the Rajah of Darjeeling! 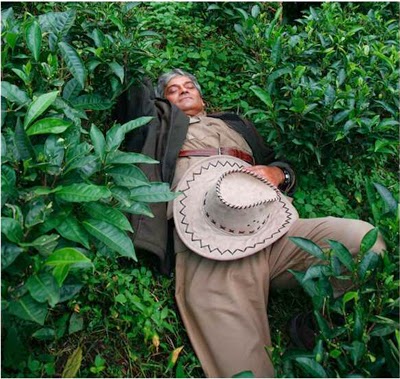 Yesterday I met with Rajah Banerjee from the Makaibari Estate in Darjeeling, India. Well only just anyway! He was in London for a day and we decided to meet at a coffee shop in St Pancras International Station before he caught his train back to Paris that day. Unbeknown to both of us, there were two coffee shops with the same name and the Rajah was in one and myself in the other! I managed to approach three people asking them if they were 'the Rajah', which prompted some very perplexed, if not slightly worried faces. After a few email exchanges via our phones (his network wasn't working in the UK) we realised what was happening and I ran downstairs to meet him - luckily we had some time to chat before his train was due to leave.

The Makaibari Estate was the worlds first tea factory, established in 1859. Rajah Banerjee became the fourth generation owner and turned the estate into an incredible, biodynamic plantation that for every acre of tea has two acres of wild rainforest. This holistic approach inspired by Rudolf Steiner has resulted in a uniquely healthy soil that produces some of the finest teas in the world. Fully organic and Fairtrade certified, the Rajah Banerjee has created an exemplary model of not only how to grow tea, but how to live sustainably and create a model that benefits everyone involved, including the environment. The first thing that strikes you about the Rajah is his charisma. He has an infectious smile and a sharp sense of humour. Unsure which place to suggest we a drink, I let him make the decision - which was straight over the road and in to the wine bar! After ordering a straight whiskey for himself and a rather nice glass of red for me, we toasted and sat down to discuss...well, almost everything apart from business.

I mentioned briefly what our plans were, before the Rajah began to tell me about the tea plantation, how everyone thought he was crazy when he decided to turn it organic back in the 80's, and his plans for the future which were ambitious to say the least, but somehow I felt confident he is going to make them work. You get the impression that he is a very well connected and influential person, not only in the tea industry but in textiles, herbs and spices. At one point things got quite deep, touching on spirituality, the concept of ownership and the universe itself!

Before we knew it our glasses were empty and it was time to leave. As we were walking to the platform I asked him how he would like to continue. He suggested we come and visit the Makaibari Estate in Darjeeling, kindly mentioning it is as much ours as it is his. I asked a few standard logistical questions about order quantities etc. but his response was 'Whatever you need we can make it happen.'

So after a firm handshake and a wave he set off on the Eurostar and I left feeling positive about the beginning of what we hope will be a very long and fruitful relationship.